The Perfect Solution for Passing Pipes Through Walls

The normal procedure for passing pipes through walls is to leave a substantial cut-out in the wall during the original concrete pouring process. Later, the contractor will pass a ‘puddle pipe’ through the cut-out, and build an intricate ‘letter-box’ shutter around it. New concrete is then poured into the void to encapsulate the puddle pipe. Not only is this a time consuming process, but very often the
puddle pipe moves with the pour and settles to a less than suitable alignment

By utilising a Viking Johnson wall coupling which is held rigidly between the shutters, the ‘boxing out’ process is eliminated. This means that pouring the wall is a simplified and is a single step process. It also guarantees that leak paths, which are inevitably set up when new concrete is poured onto old, are completely eliminated.

Using a standard Type 1 Viking Johnson wall coupling gives a versatile coupling either side of the wall where pipes can either be passed through or inserted into each side. This system allows for misalignment or angular defl ection of up to 3º on each side of the wall. In addition, the use of a
Viking Johnson wall coupling ensures that, on the outside of the structure, the fi rst ‘rocker’ or settlement coupling is built into the shear face of the wall – exactly where it is required. It also means that only one further versatile coupling is needed to form the settlement ‘rocker’ instead of two. Consequently the installed cost can be drastically reduced, particularly where a large number of through the wall joints appear on a building, for instance in a gravity treatment works.

All products are designed and manufactured under quality management systems certifi ed to ISO 9001 and conform to the American Water Works Association’s specifi cation AWWA/ANSI C219 for bolted couplings. 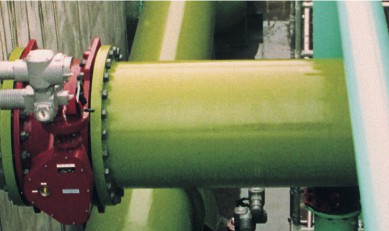